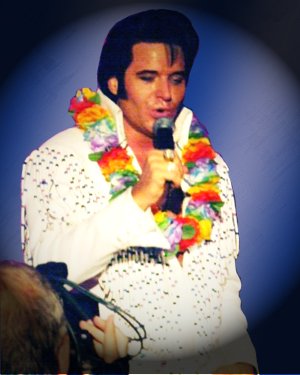 Sometimes events in your life have a way of turning out for the best!

That is what happened to JOHNNY THOMPSON in Memphis during the 2007 ELVIS WEEK. Johnny was in Memphis because he won in the preliminary Ultimate Elvis Tribute Artist competition in Del Mar, California.
Right before he left for Memphis, he told this reporter that he might not win the coveted title of “2007 Ultimate Elvis Tribute Artist” in the first-ever ETA competition sponsored by the ELVIS PRESLEY ENTERPRISES. However, he said he would be happy enough if he makes it to the Top Ten.
Unfortunately he didn’t!
But God had something better in store for him. He was crowned the “2007 Images of the King World Champion” two days later! The saying that “God will not take you to where His grace will not sustain you” is true indeed!The “Images of the King” contest was tough. Seventy-two ETAs from around the world competed in the first two days of preliminaries. Out of the seventy-two, 34 were selected to compete again in two more days of final competitions.
A suspenseful moment ensued while the judges’ votes were tallied. And then came the announcement: Johnny Thompson from Las Vegas is the new World Champion! He emailed me later that he was surprised, and very, very happy. “I wish you were here so you could have seen it!” he wrote.
I missed all the events honoring ELVIS PRESLEY on his 30th death anniversary, so I wasn’t able to see the “Images of the King” and “Ultimate ETA” competitions. For Elvis fans like me who didn’t make it to Memphis, and would like to view the announcement of the winners, log in to this website: www.imagesofthekingcontest.com.
Here are the top winners and their awards: JOHNNY THOMPSON of Las Vegas, Nevada, World champion, $1,500 cash and $1,500 gift certificate from B&K Enterprises; GINO MONOPOLI of Canada, second place, $600 cash and $800 gift certificate from B&K; SCOTT NORTON of Florida, third place, $400 in cash and $500 gift certificate from B&K. CODY SLAUGHTER won the People’s Choice award, while GENE SHAW and JERRY BRIAN tied for the Spirit of Elvis award.
The finalists who competed at the Round 1 Finals held Friday, August 17, in order of performance, were: MIKE BRAVENER, WILL GANZON, CODY SLAUGHTER, ELVIS WAYNE, JUSTIN EDWARDS, RICK WADE, OLIVER STEINHOFF, TOKI, MATTHEW SPAULDING, TONY GROVA, ADAM FISHER, GEORGE ELIAS, DANNY DALE, KAVAN and SCOTT NORTON.
At the Round 2 Finals held Saturday, August 18, the finalists, in order of performance, were: JEFF BARNES, MATT JOYCE, JOSEPH HALL, RICHARD ADKINS, LANCE DOBINSON, JOE TRITES, PAUL THORPE, JOHNNY THOMPSON, LIL’D, ANTHONY VON, JASON WHITED, TODD MARTIN, DAVID ALLEN, JESSE ARON, PETE PAQUETTE, KJELL BJORNSTED, GINO MONOPOLI, ROB LANGFORD and JAMIE McDONNEL-ROBERTS.
Other ETAs who joined the “Images of the King” competition were: JACK HOWARD, GENE LANE, PAUL BUTLER, CURT LECHNER, VAL PANGILINAN, LARRY TSCHEHALI, FRED ALBERT, KEN YUVIENCO, LOU JORDAN, MARCUS BERE, MARIO RAMOS, SHELBY DANIEL, TONY FRIETAS, TERRY McGILLIVRAY, JIM HOLMES, NASAR SFIAN MORDEN, TYLER JAMES BARLING, TORI, BRAD McCRADY, MONK PELLY, TIM DUDLEY, JAMES CARDWELL, CHRIS MARTIN, STEVE BOTELLO, SAMMY STONE, PAUL ROUSE, BILL BROOKS, MICHAEL RATCLIFFE, ALVIN SMITH, MIKE BOZZO, GARY ABBOTT, BUD SANDERS, JEFF “JELVIS” LAJESS, JIM BISHOP, TRACY ALAN MOORE, JOHNNY LOOS, DAVID MUGGERIDGE and RICHARD COOK.
Former “Images of the King” World champions were guest performers, among them: MICHAEL HOOVER, 1988; DAVID LEE, 2004; MARIO, 2005; and ELVIS, JR., 2006.
The day after the Grand Finals, Johnny attended and performed at the Breakfast of Champions together with DAVID LEE, GINO MONOPOLI, and GARY ELVIS BRITT.
“Images of the King” is the original ETA competition in Memphis, started in 1986 (21 years ago) by DOC FRANKLIN. It has evolved through the years into a family reunion, expo and entertainment showcase. Around 2,000 people from around the world attended this year’s competition.
Elvis Impersonator